High in the hills overlooking the Uruguayan city of Artigas, miners scored a “once-in-a-lifetime” geode containing amethyst crystals in the shape of a heart. When the miners split the 80kg (176 lb) rock, mirror-image amethyst hearts appeared on each side.

Uruguay Minerals director Marcos Lorenzelli told The Jeweler Blog that the geode — which he calls “The New Treasure” — was discovered in November and has a value of at least $100,000. He said he would not consider selling the two pieces separately. 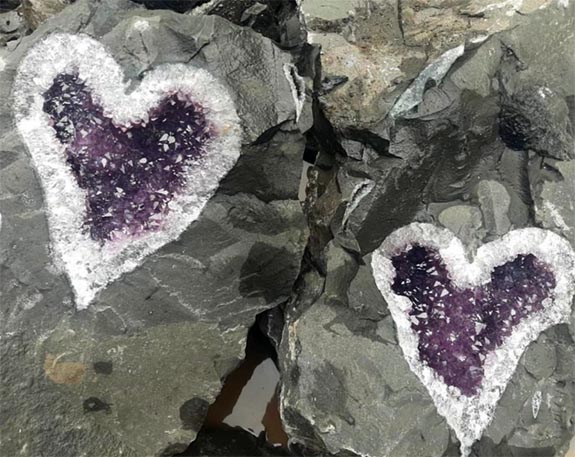 Due to its obvious ties to Valentine’s Day and February’s official birthstone, The New Treasure has recently gotten a lot of attention on social media.

Lorenzelli said that in all his years of working with amethyst geodes, he’s never seen anything like this.

The director noted that the geode was sourced at the company’s new Santa Rosa mine in Artigas, which is in northwest Uruguay, just over the border from Brazil. Incidentally, both Brazil and Uruguay are leading producers of fine amethyst, but according to the American Gem Trade Association, many dealers consider Uruguayan amethyst to be superior due to its clarity and rich, dark color.

Lorenzelli told mymodernmet.com that back in November his team had been struggling to get the excavation started at the Santa Rosa mine.

“We were opening the mine to work normally,” explained Lorenzelli, “but the land was difficult to work and our employees said, ‘We have to find something really nice due to the hard work we are doing.’”

The team was soon rewarded with The New Treasure.

In addition to amethyst, fine agate is also mined in the hills near Artigas. The region’s rich, gem-related history dates back to 1860.

If you’re a big fan of amethyst geodes, please check out the miner’s website here, as well as its Instagram here…