In honor of September’s official birthstone, we’re revisiting a magnificent 392-carat blue sapphire that smashed an auction record when it sold for $17.3 million at Christie’s Geneva in 2014. It remains the highest price paid at auction for a sapphire. 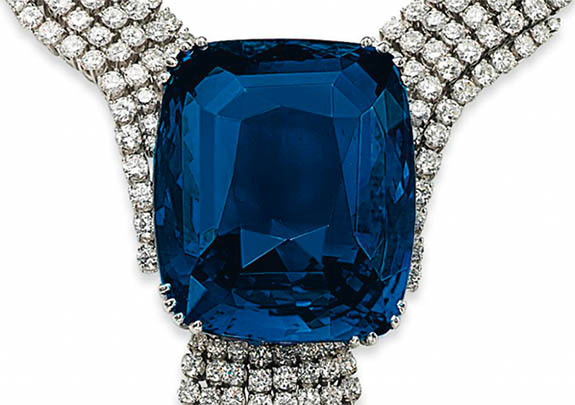 When the tense bidding session was completed on November 11, 2014, Rahul Kadakia, International Head of Christie’s Jewelry Department, slammed down his gavel and proclaimed, “The private collector, seated in the room, is now the new owner of the most valuable sapphire in the world.”

The stone has a provenance dating back 94 years. Blue Belle of Asia was discovered in 1926 at Pelmadula, Ratnapura (The City of Gems) in Ceylon (now known as Sri Lanka). It was originally owned by famous gem and jewelry dealers O.L.M. Macan Markar & Co., based in Colombo, Sri Lanka. According to Christie’s, the Blue Belle of Asia was cut and polished to its current size and shape between 1926 and 1928.

British automobile magnate Lord Nuffield purchased the gem in 1937 with the rumored intentions of presenting it to Queen Elizabeth on her coronation day in May of that same year. The Queen never took possession of the stone and it subsequently “disappeared” into private hands. Its location remained a mystery for the next 35 years. In the 1970s, the stone curiously turned up in the notes and drawings of Swiss gem dealer Theodore Horovitz, although the owner remained anonymous.

After 40 more years in the shadows, the formidable gem finally returned to the limelight in 2014 as the headliner of the Christie’s high-profile Geneva event. 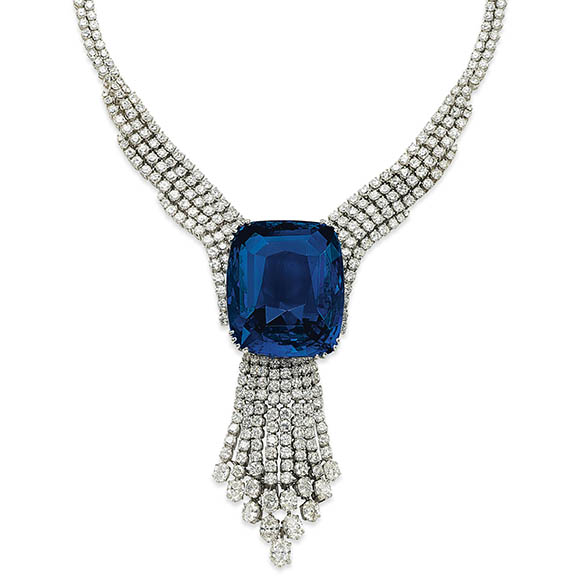 The Blue Belle of Asia is the centerpiece of a majestic diamond necklace featuring nine tassels adorned with brilliant-cut diamonds. Each tassel terminates in a larger oval-cut diamond.

All sapphires are made of the mineral corundum (crystalline aluminum oxide). In its pure state, the corundum is colorless, but when trace elements are naturally introduced to the chemical composition, the results are magical and colorful. Trace elements like iron, titanium, chromium, copper and magnesium give naturally colorless corundum a tint of blue, yellow, purple, orange or green, respectively, according to the American Gem Society. Ruby is the red variety of corundum.

In additional to being the official September birthstone, sapphire is also the preferred gem for couples celebrating their 5th or 45th wedding anniversaries.