Highlighted by a 396.30-carat pleochroic kunzite, the “Picasso Kunzite Necklace“ is the next stop on our virtual tour of the Smithsonian’s National Gem Collection at the National Museum of Natural History in Washington, DC. Pleochroism is an optical phenomenon in which a gemstone presents multiple colors when observed at different angles. 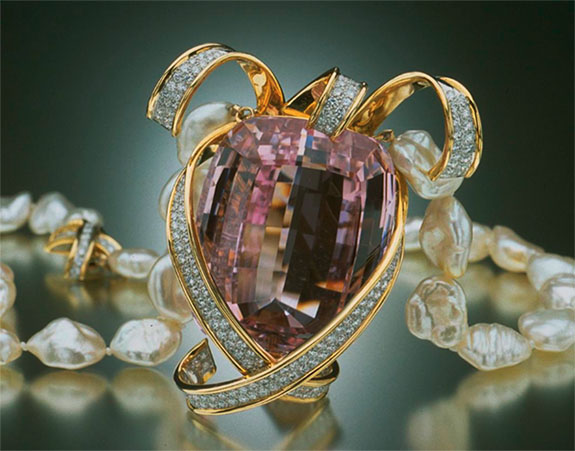 The impressive cushion-cut kunzite is set in an 18-karat yellow gold and diamond ribbon motif pendant suspended from a necklace of 30 South Sea baroque pearls. The piece was designed by Paloma Picasso to commemorate Tiffany’s 150th anniversary in 1986.

The Picasso Kunzite Necklace was donated to the Smithsonian in 1989 and is currently the featured item in a display that examines pleochroism at the Janet Annenberg Hooker Hall of Geology, Gems, and Minerals.

Normally, Smithsonian visitors would be able to see the multi-color gemstones in person, but while most of the national museums remain temporarily closed in an effort to contain the spread of COVID-19, we continue to present these virtual tours of the National Gem Collection’s most famous items. 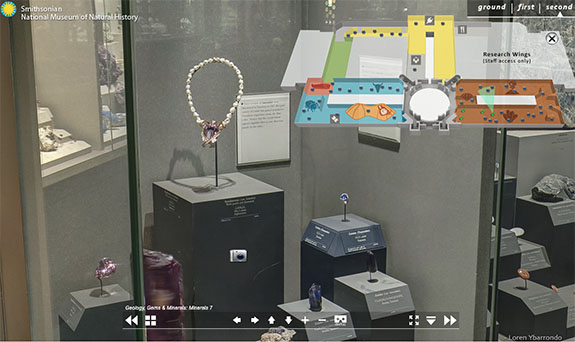 Here’s how to navigate to the exhibit called “How Many Colors?”

The resulting page will be a gallery called “Geology, Gems & Minerals: Precious Gems 1.”

— Next, click the double-right-arrow eight times to navigate to the gallery called “Geology, Gems & Minerals: Minerals 7.”

When you arrive, you will be face to face with an enormous example of Arkansas Quartz.

– Click and drag the screen 180 degrees to the left so you can see the case directly behind you. On the tallest platform of the corner exhibit is the Picasso Kunzite Necklace. Touch the Plus Sign to zoom in.

(You may touch the “X” to remove the map. This will give you a better view of the jewelry. You may restore the map by clicking the “Second” floor navigation on the top-right of the screen.)

All the crystals and faceted gems on the case share a characteristic called pleochroism. The phenomenon is described with a plaque titled “How Many Colors?“

“LOOK closely,“ commands the sign. “Can you find three colors in the large spodumene crystal below? As it turns, the crystal changes from pink to greenish-brown. Look down the length to see an intense lilac-pink. When a crystal shows different colors in different directions, it is called pleochroic, meaning ‘several-colored.’ In each direction, the crystal’s atomic structure absorbs light differently, creating distinct colors.“

Mined in Afghanistan, the 396.30-carat kunzite owes its color to trace impurities of manganese in its chemical composition. In general, kunzite crystals may appear pale pink, colorless, greenish or intensely pink when viewed from different directions.

A variety of the mineral spodumene, kunzite was first found in Pala, CA, in 1902. It was later named for George F. Kunz, a gemologist who worked for Tiffany & Co. for 53 years, according to the Smithsonian.

The 71-year-old Picasso is the daughter of the famous Spanish painter Pablo Picasso, who passed away in 1973. Paloma Picasso is best known for her jewelry designs for Tiffany and her signature perfumes.