Quartz is one of the most abundant minerals in the Earth’s crust, and in its pure state it is colorless. But when trace amounts of iron (about 40 parts per million) mix into quartz’s chemical makeup, extraordinary things happen. The colorless silicon dioxide emerges as citrine in a gorgeous array of fall colors, from the warm hues of golden champagne to the deep orange-browns of Madeira wine. 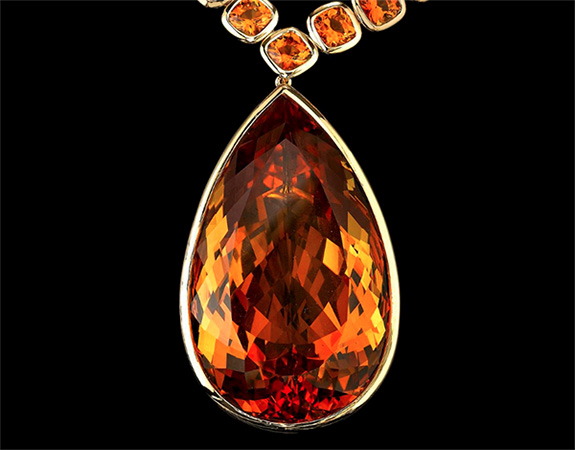 Citrine, which gets its name from “citron,” the French word for “lemon,” is one of the two official birthstones for the month of November (the other is topaz).

One of the finest examples of gem-quality citrine is the 177.11-carat pear-shaped drop that dangles from the Jolie Citrine Necklace, a stylish piece donated by actress and humanitarian Angelina Jolie to the Smithsonian’s National Gem Collection in 2015. 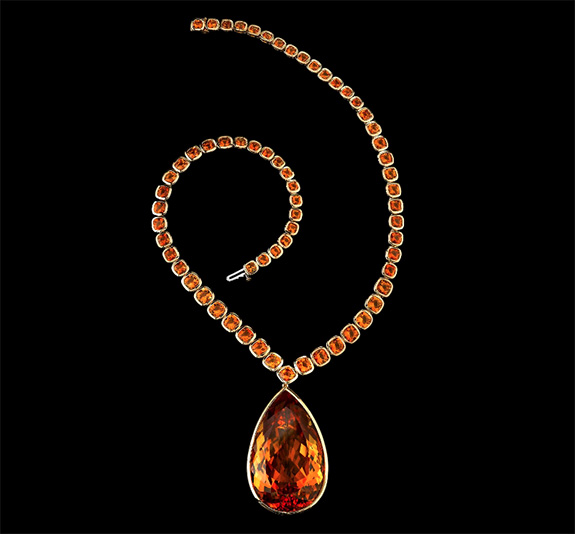 A collaboration between the actress and American jewelry designer Robert Procop, the Jolie Citrine Necklace is from the Style of Jolie jewelry collection. Jolie created the collection to promote education and establish schools in conflict-affected countries. Proceeds from the sales of jewelry in the Style of Jolie collection are donated to the Education Partnership for Children in Conflict, which builds schools for children around the world, the first few of which were established in Afghanistan.

“We are thrilled to receive this important piece for the Smithsonian,” Jeffrey Post, curator of the National Gem Collection, said in 2015. “It is the first piece of citrine jewelry in the collection. The fact that it was personally designed by Angelina Jolie and Robert Procop makes it all the more significant.”

The Jolie Citrine Necklace is on permanent display at the Janet Annenberg Hall of Geology, Gems and Minerals, which is located in the National Museum of Natural History. Sadly, the Smithsonian museums in Washington, DC, have been temporarily closed to support the effort to contain the spread of COVID-19.

Citrine is a near-cousin to other popular quartz-family members, including amethyst, rose quartz and tiger’s eye.

Most citrine comes from Brazil, but other important sources include Spain, Bolivia, France, Russia, Madagascar and the U.S. (Colorado, North Carolina and California). Citrine wasn’t always an official birthstone for November. The National Association of Jewelers (now Jewelers of America) added it in 1952 as an alternative to topaz.