World’s Most Famous Diamonds May Have ‘Super-Deep’ Origins, Says GIA

New smoking-gun evidence seems to confirm the theory that the world’s most famous diamonds — such as the 45-carat Hope and the 3,106-carat Cullinan — have “super-deep” origins, according to Dr. Evan Smith of the Gemological Institute of America (GIA), who presented his findings to geochemists at the recent Goldschmidt Conference. 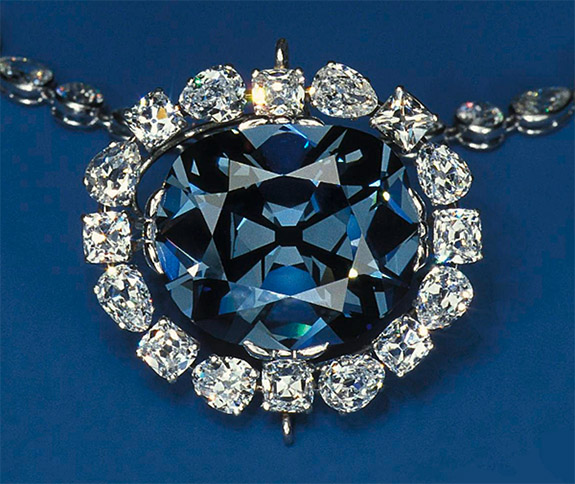 Smaller diamonds are known to materialize under high pressure at a relatively shallow depth of 90 to 125 miles amid oxygen-rich rocks. By contrast, the biggest diamonds are likely forming 200 to 500 miles below the surface within patches of oxygen-deprived liquid metal.

While conducting a spectrum analysis of a 20-carat type IIb blue diamond, Dr. Smith and his associate Dr. Wuyi Wang detected the remains of the mineral bridgmanite — a tell-tale sign that the diamond originated deeper in the mantle.

“Finding these remnants of the elusive mineral bridgmanite is significant,” Smith said. “It’s very common in the deep Earth, at the extreme pressure conditions of the lower mantle, below a depth of 660 km (410 miles). Bridgmanite doesn’t exist in the upper mantle, or at the surface.”

Smith explained that what they actually identified in the diamond was not bridgmanite, but the minerals left when it broke down down as the pressure decreased.

“Finding these minerals trapped in a diamond means that the diamond itself must have crystallized at a depth where bridgmanite exists, very deep within the Earth,” he concluded.

Back in December of 2016, when he was a GIA Postdoctoral Research Fellow, Smith studied the super-deep origins of “offcuts,” or remnants, of large rough diamonds that had been faceted into precious gemstones.

The offcuts offered a window into the workings of the Earth’s deep mantle because their inclusions were teeming with other elements. Typically, these flaws and imperfections are removed during the cutting and polishing process to maximize the beauty and clarity of the diamond. For the researchers at GIA, the neatly preserved inclusions held all the value even though some were no wider than a human hair.

“You really couldn’t ask for a better vessel to store something in,” Smith told NPR at the time. “Diamond is the ultimate Tupperware.”

The GIA had obtained eight fingernail-sized remnants for the study. After grinding them down and analyzing them with microscopes, lasers, electron beams and magnets, Smith and his team concluded that the diamonds contained a solidified mixture of iron, nickel, carbon and sulfur.

Unexpectedly, they also found traces of fluid methane and hydrogen, which led them to conclude that pure carbon crystallized to form diamonds in an oxygen-deprived mix of molten metallic liquid in Earth’s deep mantle.

“Some of the world’s largest and most valuable diamonds exhibit a distinct set of physical characteristics that have led many to regard them as separate from other, more common, diamonds. However, exactly how these diamonds form and what they tell us about the Earth has remained a mystery until now,” Wang explained in 2016.

Despite their origins far below the Earth’s surface, diamonds can blast to the surface during volcanic eruptions. The vertical superhighways that take the diamonds on their journey to the surface are called kimberlite pipes.