A stunning 332-carat blue star sapphire set atop an 18-karat gold crown has been attracting huge crowds to the showroom of luxury jeweler Tiesh in Sri Lanka’s ancient capital city of Kandy. 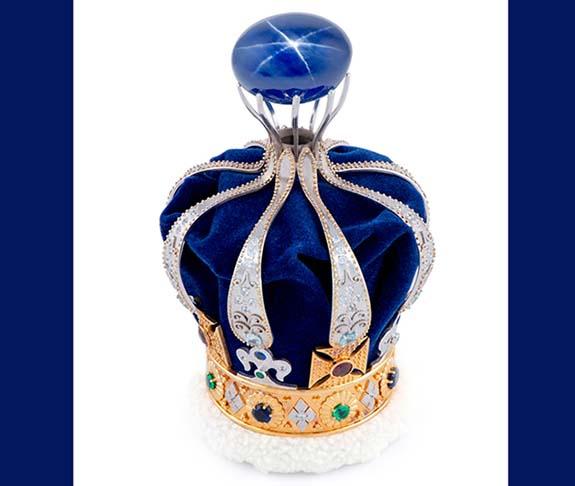 Dubbed the “Tiesh Blue Empress,” the stone displays a prominent six-rayed star due to a unique optical phenomenon called “asterism.” The Tiesh company, which operates showrooms both in Kandy and Colombo, Sri Lanka, claims the gem is the “largest-ever commercial blue star sapphire.”

The mother stone of the Tiesh Blue Empress weighed an astonishing 201,500 carats and was unearthed in the early 1980s in the world-famous Ratnapura mining district. The carat weight of the mother stone is equivalent to 40.03 kg or 94.86 lbs. The cabochon-cut star sapphire weighs, by comparison, a mere 2.34 ounces.

“We are both humbled and elated to present the Tiesh Blue Empress not only to Sri Lanka but also to the world,” said Lasantha de Fonseka, the founder and managing director of Tiesh. “Her rightful abode is neither in a safe nor in a bank vault, but rather showcased to be admired by the world. Her presence now firmly positions Kandy on Sri Lanka’s and the world’s tourism map. Needless to say the boost and visibility she will give Sri Lanka’s gem industry is inestimable.”

The Tiesh Blue Empress sits atop a crown handcrafted in 18-karat yellow gold and white gold, set with an array of other precious Sri Lankan gemstones. The showpiece is now on permanent public display at the Tiesh showroom in Kandy, under special 24-hour security. The company intends to keep the Tiesh Blue Empress on public display until an interested party makes a bid for it.

Sri Lanka is known for her abundance of gemstones within a very small geographic area and is especially famed for her blue sapphires, star sapphires and cat’s eye gems.

Fine star sapphires display a defined “asterism,” a word derived from the Latin word “astrum,” for “star.” According to the Smithsonian, the asterism is actually caused by titanium trapped in the corundum while the crystal is forming. As the crystal cools, the titanium orients itself as needle-like structures in three directions. The cabochon cut’s smooth, rounded surface allows the light to reflect off the titanium, revealing a six-legged star.