Tyler Farrar knows better than most how the best laid plans of mice and men often go awry — especially in unpredictable bodies of water.

Exactly one year ago, the Sevierville, Tenn., native brought his girlfriend, Cassandra Arn, and a bunch of close friends to Panama City Beach on the Florida panhandle to enjoy some fun in the sun. What Farrar also had planned was a surprise surf-side marriage proposal.

In preparation for the big moment, Farrah and his buddies waded out into the shallow waters to practice how the future groom would deliver his “message-in-a-bottle” proposal. His good intentions were quickly wiped out when a huge wave knocked him down and jarred loose the engagement ring that he had carefully stashed in a Ziploc-style bag within the Velcro-sealed pocket of his bathing suit.

For 45 minutes, Farrar and his buddies frantically searched unsuccessfully for the ring.

“I never thought it would be found,” he told newsherald.com. 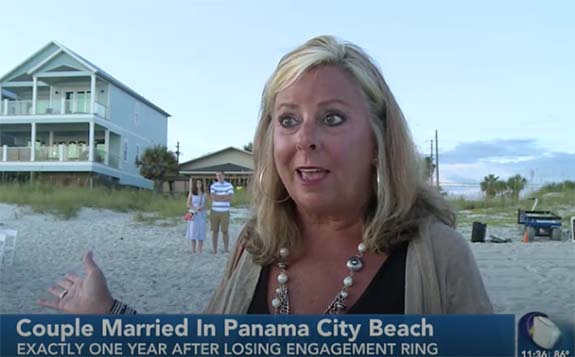 Meanwhile, not too far down the beach, Florence, Ala., resident Sandy Osborn was sitting on a beach chair where the surf meets the sand when she noticed an unusual plastic bag tumbling right under her legs. It seemed to contain a license, a bank card — and an engagement ring. Osborn planned to call the bank to identify the cardholder, but before she could, she noticed a bunch of Farrar’s friends asking beachgoers if they had seen the ring.

When Osborne produced the bag of valuables, the thrilled friends took custody of it and ran it back to Farrar.

With the ring now safely in hand, Farrar decided to ditch his elaborate water-borne proposal scheme.

He kneeled in front of Arn and asked her to marry him. She said, “Yes.”

“I’m super thankful,” Farrar told newsherald.com. “It gave me faith in humanity. There still are some decent people out here. I appreciate her honesty.”

Arn and Osborne connected right away and kept in touch during the past year. Osborne recounted how she convinced the couple to reconsider their wedding venue.

“[Cassandra] said, ‘You gotta come to our wedding.’ I know they live in Tennessee, I live in Alabama, and they planned on getting married in Tennessee, and I said, ‘Ya’ll need to come back to Panama City Beach and do it here, where it all happened.’ Osborn told TV station WJHG. “So the next thing I know, I’m getting an invitation in the mail to come back for their wedding.” 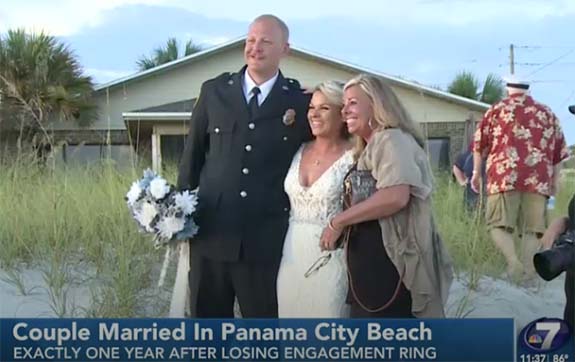 On Saturday, August 3, only a few yards from where the ring was lost, and with Osborne in attendance, the Farrars took their vows.

“I’m just so happy to be here and be a part of it, because it’s just a once-in-a-lifetime memory. And I’m just so glad I found the ring because it could’ve easily been lost forever,” Osborn told WJHG.

You can check out WJHG’s coverage of the story here…